Ross-on-Wye is a quirky little town sitting high on an escarpment overlooking great horseshoe bends in the River Wye. It has a really high proportion of independent shops, including a Vintage Trail, food shops and tea rooms, local crafts and much more.

It is one of the early towns to gain WAW accreditation and takes its welcome of walkers seriously. Walking in the Ross area has something for everyone, from flat riverside paths to steep climbs, fields and woodland – and amazing views! Ross is the only town that is entirely inside the Wye Valley Area of Outstanding Natural Beauty. Ross claims to be the birthplace of the modern package tour when the 18th Century the local Vicar organised up market tours by boat to Chepstow. The Ross WaW Group specialises in providing led walks for visiting groups; and a range of self-guided routes. It also has the advantage of being relatively unknown, so a great chance to go walking without any crowds.

In normal years local annual events include the Beer and Cider festival on the first weekend in May, the summer carnival on the first Saturday in August; a Country and Western festival in July and a Winter fair in November. In alternate years there is a river festival that travels of the length of the river Wye from Hay to Chepstow.
The Ross-on-Wye Annual Walking Festival takes place at the end of September/ early October and offers special interest features such as a Cream Tea Walk, birdwatching, local history/ geology, iconic views of the Wye gorge and surrounding countryside and a steam train ride in the nearby Forest of Dean. 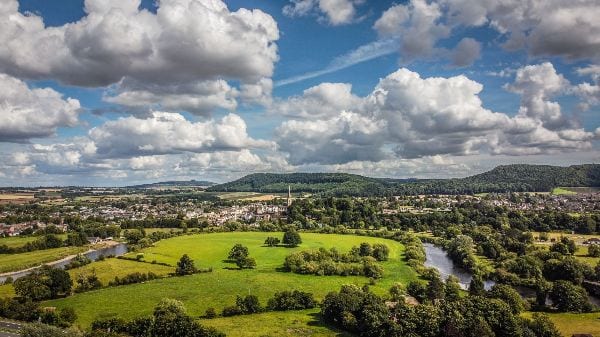