There are hopes an oddly decorated tree in Cumbria could play a part in boosting tourism. The small ash, at the side of the A685, near Kirkby Stephen, was spotted with a pair of boots dangling from its branches last year. More items of footwear have since been added, anonymously.

A local group, which aims to promote the market town as a destination for walkers, is hoping that it will encourage people to stretch their legs.

In 2009, Kirkby Stephen became the first town in Cumbria to be awarded Walkers are Welcome status. It also aims to encourage visitors to use public transport as much as possible.

Anne Sandell, from Kirkby Stephen Walkers are Welcome, said: “It was only a couple of pairs of boots to start with, and it’s really grown since then.

“People have started beeping as they come past in cars. “We’d like to promote walking tourism, so it’s quite an attraction, as it shows who we are.” 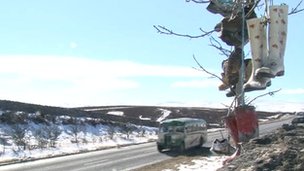 From humble beginnings in 2007, Abergavenny has become the 100th Walkers are Welcome town and their Patron is none other than Kate Humble!

The Abergavenny WaW group is delighted that local television celebrity Kate Humble has agreed to be their patron. Kate said: “I’m delighted to be a patron for Abergavenny’s Walkers are Welcome. Abergavenny is a pretty market town, surrounded by spectacular countryside. The gateway to the Black Mountains, it is the perfect base for walkers who appreciate glorious, diverse scenery and want somewhere to come back to that offers great local food and lovely places to stay. Walkers really are genuinely welcome!”

Nigel Bottling, Chair of the National Executive, said “This was a first class application which clearly demonstrated not only how much the town offers to welcoming walkers, but the enthusiasm of those involved in wanting to improve what’s on offer.”

Abergavenny’s Steering Group hopes to create an online resource for walking, developing packages with local businesses, creating a new range of simple walks from the town centre and working with the council to improve the local rights of way network. “To keep this prestigious award, the town has to show it is always looking to improve and there are many other initiatives planned,” said Ruth Coulthard, Chair of the Steering Group.

A large launch event is planned for Easter when it is hoped over 100 people will gather on Castle Meadows. 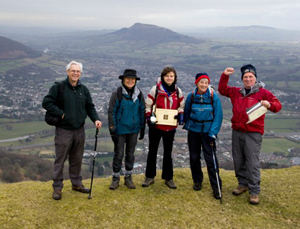 The inquiry into the proposed extensions to the Lake District and Yorkshire Dales National Parks will be open at 10.00 am on Tuesday 4 June 2013 at the Castle Green Hotel, Castle Green Lane, Kendal LA9 6RG and is expected to last approximately 4 weeks.  An enquiry website is expected to go live by Monday 11 February. Visit: www.lakestodales.info

WaW invited to the launch of Britain on Foot

The Chair of WAW was privileged to be invited to the Houses of Parliament for the official launch of Britain on Foot, an initiative sponsored by the Outdoor Industries Association (OIA). Kate Ashbrook, our patron represented the Open Spaces Society.

Andrew Denton who is the Chief Executive of OIA addressed the meeting and he introduced Anna Soubry MP parliamentary Under Secretary of State for Health who emphasised the benefits that walking brings not only to the individual but the local economy.

Kate and I met up again with Laura Sims of HF holidays (Laura attended the Church Stretton conference) and introduced to the chief executive of HF holidays Brian Smith. A meeting is to be arranged to see if HF Holidays can help Walkers are Welcome in some way. We hope to do this at the end of January and will advise of our progress in due course.

In addition we have had a subsequent meeting with Terry Stephenson of OIA. Terry has got some excellent ideas and would like to assist us in raising the profile of WaW.

We will keep you all posted on progress on this as well.

The campaign to get Britain on Foot will be launched in March so look out for their logo.