Launch of the 80 mile Wyche Way

The 80 mile trail starts from Kington in Herefordshire to meet The Cotswold Way at Broadway Tower. The trail is the brainchild of Guy Vowles, a experienced long distance walker.

More than 120 people joined one or more of the 11 guided walks which were on offer as part of Baildon’s Second Annual Walking Weekend. The selection of walks ranged from a one mile long historical tour of the churches and chapels of Baildon, to a nine mile hike across three local moors; an “Urban Explorer” walk which took participants into the centre of Bradford on “green corridors” and a circular trip to Esholt

Walkers came from not only Baildon itself, but from further afield including other parts of Bradford and Leeds, and as far afield as Devon and Shropshire.

A Northern Get Together was organised by Kirkby Stephen on 10th August at Kirkby Stephen Hostel. There were 49 delegates from all over the north of England, one from Scotland and also WAW Chairman, Sam Phillips and his wife from Ross-on-Wye.

The purpose of this Mini Get-Together was to bring together northern Walkers are Welcome towns and villages for the purpose of networking and sharing best practice. Delegates used the opportunity to discuss their successes and seek advice from others. Overall, the meeting was very worthwhile and a similar event will be held.  Maybe other areas of the country may wish to replicate.

One of Shropshire’s War Walks on the Home Front is called ‘Walking in the Footsteps of a Survivor’, because Simon joined up at 19 and served the full 5 years of war with the 16th Cheshires. Wounded severely in the legs in August 1918 he lay awaiting recovery from a shellhole for 3 days, inhaling the deadly mustard gas. He later wrote: ‘If gas goes deep a man has it with him all his life’. His life lasted almost 45 years, yet for the last 16 years he walked over 75, 000 miles as a country postman in Cleobury Mortimer. In his rest hut, 12 miles into his daily round, he wrote articles, which later became books & radio broadcasts. 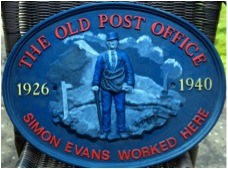 Dave Pickersgill of Stocksbridge WaW group won the OS competition for the ‘Sheffield and Barnsley’ OS map. His photo will be on the new editions from July.

Poetry walk on the moors

Members of the local walking community joined visitors to the 3rd annual Bodmin Moor Walking Festival where Brian Oldham of Liskeard’s Walkers are Welcome group led a walk around the Marke Valley and Phoenix United mines. The walkers enjoyed the stunning views of Bodmin Moor and Dartmoor, heard about the successes and failures of local mining ventures and listened to readings by local student Ocean Swann from poems by Charles Causley, John Harris and festival organiser Ann Gray, to the accompaniment of a visiting cuckoo.

Last April, on a gorgeous Sunday morning, seven bloggers and Fudge the dog were invited to discover Bingley and celebrate its new status of Walkers are Welcome town. Many of them were coming from Leeds and after a convenient short journey on train they were met-up at the station. The destination was St Ives estate, a delightful wooded area above Bingley with a particular scenic spot called the Druid’s Altar only accessible on foot. And after a gentle 2 hours walk, everyone was invited to have lunch at the Brown Cow, a local pub-restaurant welcoming all walkers.

Everyone enjoyed the walk and most of the bloggers had never been to Bingley before so it was a complete surprise. As Daisy one of the bloggers puts it “I really enjoyed the day and was very surprised at how beautiful Bingley was. I grew up in Yorkshire but had never visited the area. I’m keen to go back again during the summer and spend more time exploring the area.” 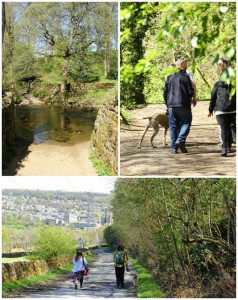 The purpose of this free Mini Get-Together is to bring together northern Walkers are Welcome Towns and Villages for the purpose of networking and sharing best practice. The general subject will be ‘Achievements through Partnerships’ and a number of Kirkby Stephen partners will be present.

Ann Sandell, the Chair of Kirby Stephen and the national Secretary is arranging the event and will take you on a 3 mile walk around the town highlighting some of their facilities as well as some of their problem areas.

This will be followed by a free networking lunch after which you will be able to further explore the area, see the volunteer run Upper Eden Visitor Centre and shops or chat further with national committee or network members.

If you plan to attend please RSVP before 31st July 2015 to Secretary@walkerarewelcome.org.uk

For full details of the programme please click here. 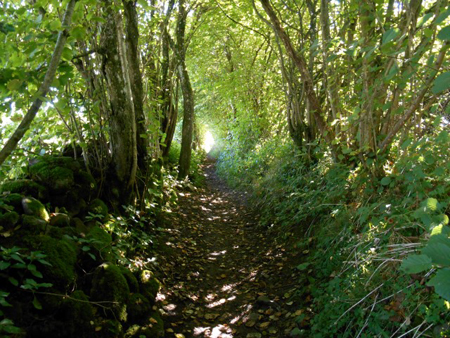 If you wish to extend your stay in the area, accommodation is available from the independently run hotel or a castle or everything in between.

Five WAW towns in the Shropshire Hills started working together in 2010 to cross promote each other’s towns and walking events. 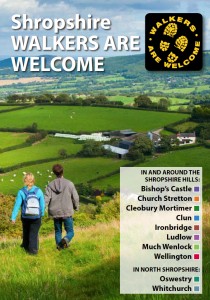 They initiated a series of day visits to each other’s towns to get to know them better. In 2012 they published a joint promotion leaflet.

By the end of 2014 the group of 5 towns had increased to 8 and with two further towns in the north of the county Shropshire, the Council agreed to extend the leaflet to 28 pages to cover all 10 towns and promote the wonderful range of walking opportunities in our county.

With active support from the Parish Council, Disley Footpaths Society had steered a successful application process through from spring last year with wider support from local businesses and organisations – and from the village as a whole with nearly 400 signatures garnered for the required petition.

David Rutley MP, said “It is great to see Disley become part of the Walkers Are Welcome initiative. I would like to thank all those who have worked so hard to make this possible – they have my full support. At a time of growing physical inactivity across the country, it is vital that we see more schemes like this get started. It is good for health and wellbeing, and it is also good for Disley’s local businesses, so everyone involved benefits