For those who fancy touring the hills of the English-Welsh borders by electric bike can now recharge both themselves and their bikes as Knighton (Powys) offers three re-charging points for electric bikes.

Electric bikes can be re-charged at Tower House Gallery, Prince and Pugh (both with their own coffee shops) and at Bradfords, on the corner opposite the Knighton Hotel and within a few yards’ walk of another pub and two cafes.

During their recent Walking Festival each of the routes on the postcard was followed, as well as town and many themed walks with guest leaders. The map and compass sessions and the bird and bat walks have received particular praise along with the Nordic walk. 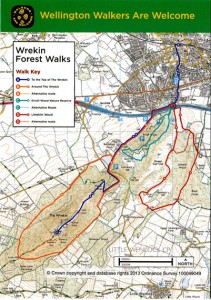 Elham Walkers are Welcome in partnership with Elham Primary School are staging the Elham Challenge on Sunday 22nd September 2013.

A 5km children’s Treasure Hunt or for the grown ups a 20km walk or run on a circular route in the beautiful Elham Valley starting from Elham School, CT4 6TT

A great booklet has been designed and produced by Mytholmroyd aimed solely for children. This colourful booklet is full of fascinating information for kids (and their parents) with some walks suitable for buggies. There are plenty of facts, practical ideas and simple questions to inspire the next generation of

A great idea which other Walkers are Welcome towns could follow. If you would like a copy please contact Rose Wheeler – details can be found under the membership section.

The information board along with a board at Surprise View on the Chevin Ridge,  highlights published leaflets describing a range of  local walks and the Six Dales Trail. The Boards also provide information about the annual Otley Walking Festival;  Otley Walkers – the community based walking group and the new 43 mile Northwest Leeds Country Park and Green Gateways Trail.

Full information about walking opportunities in Otley is available on their website: www.waw-otley.org.uk 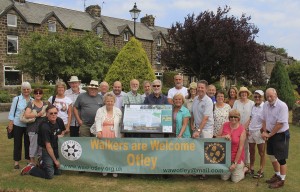 The Snaith & Cowick Walking Group are this year celebrating their seventh year of Tuesday walks during the summer months.  They started originally guiding walkers around a few local walks and have successfully built their offer to a range of morning, afternoon, evening and all day walks with varying lengths and locations.

The launch at Easter 2012 of 15 Lottery funded Heritage Walks, complete with Information Boards, plus Snaith becoming a WALKERS ARE WELCOME town at the beginning of this year, plus its position on the Trans Pennine Trail have all contributed to an increase in walking activity in and around the area.

Kirkby Stephen and District Walkers are Welcome won the Upper Eden Green Business Award.  Their nomination read ” The enthusiasm and passion demonstrated by the team is simply inspiring, and their contribution to the economic development of the area must not be overlooked.  Walking is a green business, in both the reduction of CO2, and also the impact on the environment.  Walkers in Upper Eden stay longer, spend more and are great networkers who promote the area to others.  This group has raised the profile of Kirkby Stephen and Upper Eden to a national level.  Well done Kirby Stephen.

Chesham has just launched a Food Trail leaflet that Chesham Food Trailpromotes local food producers both within the town and surrounding areas. It has a map of where the producers can be located in the High Street area and then three country walking routes. The leaflet can be downloaded at www.chesham.gov.uk/Walks/Chesham_Walks.aspx

Bradford on Avon are singing about walking

Check out their website to listen to the song ‘Walkers’ that was especially written for their first walking festival.
Visit: www.walkbradfordonavon.org

Llandovery launch their WaW status with a Walk for Life 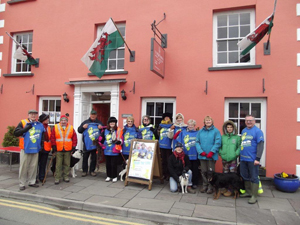 Llandovery thought that it would be a fitting way to mark their newly-acquired WaW status by holding their very first community event in favour of the Kidney Wales Foundation. Indeed, it is one of the Charities which the Welsh RFU have chosen to support, and Leigh Halfpenny, the Wales full-back and Player of the Six Nations Tournament 2013, is the public face of their involvement.

Mrs. Dorothy Burgess, a Llandovery Town Councillor and herself a former nurse, looked after most of the administrative arrangements, while the Llandovery Walkers are Welcome planned the route, and organised the marshals. It was a very successful day and received very good coverage in the local press, namely the Carmarthen Journal and the Towy Valley Guardian. With sponsorship forms and contributions still coming in, we now await to find out how much was raised for the Kidney Wales Foundation.