After 25 years the pioneering Kington Footpath Scheme in Herefordshire has come to an end.  The scheme was invented and run by Peter Newman of the Open Spaces Society, with Herefordshire Council and the Hereford Probation Service. 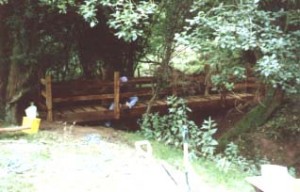 Offenders on Community Payback worked with Peter and the council to install about 800 stiles and gates, a similar number of waymarks and fingerposts, and many notice-boards and footbridges.  They have maintained countless footpaths, bridleways and byways in 16 parishes in north-west Herefordshire including parts of Offa’s Dyke National Trail and the Mortimer Trail.

Kate Ashbrook, general secretary of the Open Spaces Society and patron of the Walkers Are Welcome Towns Network: ‘The scheme has done massive good for this rural area.  By opening up paths and making them easy to find and use, the offenders have also helped the local economy.  People come here to walk and ride, but will only return if they have a good experience.

Will Steel, Network Regulation Manager for Balfour Beatty which undertakes public-path maintenance for Herefordshire Council, said: ‘The Kington Footpath Scheme has been an amazing achievement, having delivered huge improvements to the condition of local public rights of way. Peter’s consistent endeavours to improve the local area for residents and visitors alike through signposting, waymarking, clearing vegetation, replacing stiles with gates and numerous other projects, is truly commendable.

‘Even in its infancy, the project was far more advanced than others of its time and it offers a pillar of exemplary community-led engagement in today’s world of localism and devolution of services.

Their work has substantially helped to put Kington firmly on the tourist map, as a centre for walking.  Peter Newman has given up his Sundays throughout this time and worked alongside the supervisors and offenders to achieve all this.’