Intrepid walkers during a soggy December

The Llandovery WaW group ended their programme for the year 2015 with a walk which took them around the boundaries of their neighbouring parish of Myddfai, a little further east of Llandovery in the foothills of the Brecon Beacons.

A detour was made down towards the derelict property of Abertriplwyf, i.e. the meeting place of three parishes. i.e. Myddfai, Llangadog, and Llanddeusant. It was a fascinating settlement to visit, and there is no doubt that members of Llandovery WaW will be returning to the site as a lot that can be done to make the site more attractive to visitors, essentially cutting down the brambles and intrusive trees, and perhaps cleaning some of the rusty machinery parts which are still to be found there in the undergrowth. 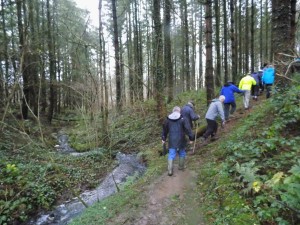