The recently formed Horncastle Walkers are Welcome group celebrated the completion of a successful launch event on Sunday 1 June.

The group was formed less than 12 months ago and has made an ambitious start by hosting the closing ceremony of the 2014 Wolds Walking Festival held at the Stanhope Hall. The main objective of the group is to promote and encourage walking in the beautiful Southern Lincolnshire Wolds to the benefit not only of local businesses but to the health of the public in general.

Over the weekend the Town became the starting point for no less than nine walks ranging from a serious nine mile walk taking in Fulletby and West Ashby led by local author Pete Skipworth to a “Horrible Horncastle Walk” led by Paul Scott and Pete Harness. This popular exposition of the Town’s more macabre past ended with a BBQ put on by the Lions’ Club at the Sir Joseph Banks Centre.

At the closing ceremony performed the Town Mayor, Cllr Sandra Campbell-Wardman, presented Gail Dymoke, the Chair of the WAW Group, with an unusual cake in the form of an edible pair of walking boots! 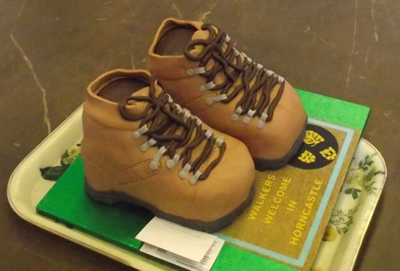 “The whole weekend has been a huge success” said Gail. “Everybody has worked so hard and local businesses have been so generous with their support and raffle prizes”